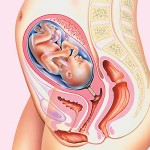 Week 26 is crucial for both the mother and the baby. They could do best with tones and tones of care showered on them.

Your uterus is two and a half inches above the protruding belly button.

If you are getting sudden cramps in the lower stomach, that is only very natural.

The cramps are called “Braxton Hicks Contractions”. These are like menstrual cramps, usually painless and happen throughout the day irregularly.

Through these contractions, the body is preparing itself for the big job of going into labor.

The uterus at this stage continues to grow at a rate of 1cm per week during pregnancy.

Many women have a weight gain of 15-25 pounds at this time and the weight gain would depend on the retention of fluids.

The comfort level of your body starts lessening from week 26. These are the few symptoms of this week – itching, hemorrhoids, round ligament pains, occasional headaches, frequent urination, stretch marks, and indigestion, or heartburn.

You can get help with the stretch marks if you use cocoa butter.

Your baby weighs at least two pounds now and he is around nine inches long.

The lungs begin to have the air sacs this week. The lungs secrete a substance called surfactant, which covers the inner lining of the air sacs in the lungs.

The lungs then start expanding with the breathing. There is also the development of the brain and it starts developing with the auditory and visual systems.

The baby’s eyes were so long shut but it now will begin to blink. The eyelashes are growing and there is more hair growing on the head.

The baby now weighs a little less than 2 pounds look wrinkled but it will gain weight slowly during the next 14 weeks.

The baby can hear you and people around you. The baby would jump at sudden loud noises and you can feel that inside.

The baby can hear sound of your digestion, heartbeat and other functions in the body as well as other noises.

Some light also passes through and he can feel the difference between light and darkness. She weighs over one pound now, and is a little above twelve inches in length.

The father and the mother should both think of making the room baby proof, because in a little while the baby will be moving about in your home and blocking off staircases, choking hazards can be removed, smoke alarms have to be installed.

These can be discussed together. If you are planning to have a nursery, it is a good time to start now.

Prepare yourself from now to give the baby some amount of your time and make that time your quality time for the baby.