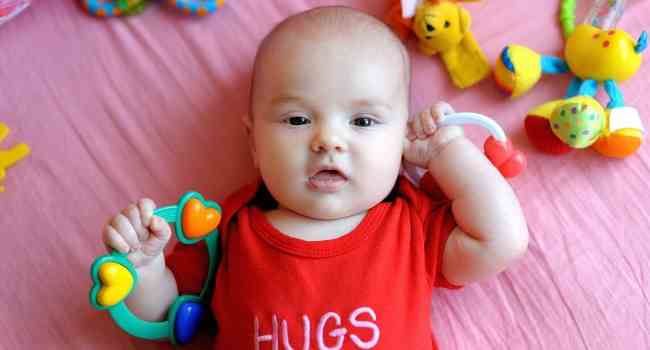 Your baby can now support some of his weight on his legs, and he loves to bounce.

What’s more, he’s probably able to sit unsupported (which frees his hands for exploring) and pivot to reach the desired object. He may even be able to get into a sitting position from lying on his stomach by pushing up on his arms.

Your baby’s fine motor skills are coming along, too. By now he can probably scoop things up with just one little paw and transfer them from one hand to the other fairly easily.

He may also be able to clasp his hands together and sip from a two-handled cup (with your assistance).

Before long, you’ll probably notice the noise level increasing, not only because of your baby’s babble but also because he’ll find out how much fun it is to bang objects together.

To encourage fine motor activity, place a toy just out of your baby’s reach and watch him try to get it. If he cries because he can’t quite reach it, keep giving him relaxed encouragement but not the toy.

He’s just venting frustration and will become more physically confident more quickly if you don’t make everything easy for him.

After a few tries, he’ll be able to lean forward to grab the toy and then straighten himself again.

Before long he’ll be rocking back and forth on his hands and knees, or maybe creeping or even repeatedly rolling over to move about the room.

Aid his mobility by dressing him in loose, comfortable clothes.

Though teething can start as early as 3 months or as late as 12 months, most babies sprout their first white caps (usually the lower central incisors) right about now.

Don’t be alarmed if your baby has gaps between some of his pearly whites. Teeth often come through the gums at odd angles, and any spaces commonly disappear after all 20 baby teeth have broken through.

Once your baby starts teething, you can expect more drooling and experimenting with sounds as he adjusts to having these strange new things in his mouth.

By now, you may have already told your baby that the telephone is not a toy, or that rattles are not for throwing, or that his sister’s hair is not for pulling.

The fact is, at this age your baby may begin testing your authority by refusing to follow your directions or entreaties.

He’s not being disobedient or willful he’s just curious. Keep in mind that he also simply can’t remember things for more than a couple of seconds at a time. The best tactic is to use a simple no, then distract him.

The beginnings of separation anxiety

If your baby is anxious when he’s away from you during the day, his concern will be compounded at bedtime.

When he wakes up at night, even for a moment, he’ll know you’re nearby and will be vocal about trying to get your attention.

You’ll feel torn between the strong urge to scoop him up and take him to bed with you and the voices of those who tell you that to do so is to spoil him.

Don’t worry: It won’t hurt to indulge him occasionally not always by bringing him into bed with you.

When the separation anxiety disappears, you can teach him to sleep by himself again. Of course, if you’ve opted for the family bed, you’ll always be close at night.

FYI: Your baby’s reluctance to be separated from you may delight you or just plain frustrate you at times. In either case, it might help to load a laundry basket with toys and move it and him from room to room so you can get chores done while enjoying each other’s company.

Your baby now actively engages in hiding games and can remember that the jack-in-the-box pops up at the end of the song. He’s also able to recognize different tones and inflections and may burst into tears if you speak harshly.

Figuring out how objects relate

Your baby’s beginning to understand how objects relate to one another in three-dimensional space.

He may be able to sort toys, grouping items such as blocks by size. And if he admires his reflection in a window and you suddenly appear behind his image, he’s likely to turn and look for you instead of believing that you’re in the mirror itself.

A simple game of peekaboo might be fascinating to your baby. That’s because he’s starting to understand object permanence (that an object he can’t see can still exist) and loves games where people or things appear and disappear.

One of the easiest ways to keep a 7-month-old occupied is by hiding an object under a blanket for him to discover.

Because he likes predictability, your baby enjoys playing the same game over and over. In addition to peekaboo (see above), try adding classics such as patty-cake to your repertoire.

At this age, babies also tend to gravitate toward stuffed animals, both big and small.

Most likely, one will emerge as the favorite security object and will soon be covered in drool and accompanying you everywhere. When adding new members to your plush family, look for soft, well-stitched stuffed friends.

If your baby has a favorite plaything or two, the expression “as easy as taking candy from a baby” no longer applies. While it used to be easy to remove things from his grasp, you may now find him protesting loudly when you take toys and other things away.

Remember, each baby is unique and meets physical milestones at his own pace. These skills are simply a guide to what your baby has the potential to accomplish if not right now, then shortly.

If your baby was born prematurely, you’ll probably find that he needs a bit more time before he can do the same things as other children his age. Don’t worry. Most doctors assess a preterm child’s development from the time he should have been born and evaluate his skills accordingly.