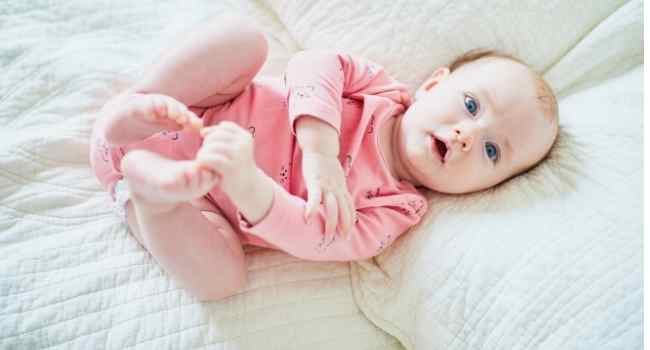 Your baby has a bigger tummy now that he’s 4 months old, so he won’t need to refuel as often.

Four or five times a day will often do it unless he’s exclusively breastfed (in which case he’ll still want to eat six to eight times a day).

He may have doubled his birth weight by now, and he’s still gaining, of course, despite his more mature eating schedule.

Don’t expect maturity in his eating habits though — he’s easily distracted now, and feedings can become frustrating as he stops to watch a sibling or respond to outside noise.

You might try to minimize distractions by feeding him in a quiet, darkened room, for example.

New talent for rolling over

When placed on his stomach, your baby will lift his head and shoulders high, using his arms for support.

This mini push-up helps him strengthen his muscles and get a better view of what’s going on.

He may even amaze you (and himself!) by rolling over from his back to his front, or vice versa.

You can encourage this through play: Wiggle a toy next to the side he customarily rolls to in case he’s interested enough to try again.

Applaud his efforts and smile; he may need your reassurance since new actions can be frightening.

Of course, you’ll also need to keep a hand on your baby during diaper changes. Never leave him unattended on a bed or any other elevated surface now that he can get around.

For the first four to six months of life, your baby gets all the nutrients he needs from breast milk or formula.

Still, parents are often eager to start their babies on solid foods. Your baby’s digestive tract is indeed more developed and his tongue-thrust reflex is starting to fade at this point, so it seems a logical time to start feeding him some solids, like pureed baby food or cereal.

But there are good reasons to wait, too. Starting solids later may cut down on possible allergic reactions, for example, and ensures that breast milk or formula won’t get crowded out of your baby’s diet.

And if you’re hoping that eating solids will help your baby sleep through the night, studies have shown that you can’t count on that helping. If you’re unsure about when to introduce solids, talk to your child’s doctor.

Reaching out and mouthing objects

Your baby is now able to reach out and grab an object, even though he often misses the mark on the first try.

Once he wraps his hands around something, he’ll study it for a moment and then try to put it in his mouth, so be sure that whatever you give him is too big to fit in.

You may also notice more drooling now. Some babies can start teething as early as 4 months, but the first tooth usually doesn’t surface until 5 to 6 months.

Encourage your baby to explore and play with a variety of objects. Something as simple as a clean cloth diaper might occupy him for a few minutes.

Watch him suck on it, hold it, and discover what happens when he scrunches it up. Give him a light rattle and watch him delight in the sound it makes when he shakes it.

An activity center or crib gym is a good choice for this stage, as your baby begins to discover the cause and effect of moving a lever and hearing a bell ring, for instance.

By now, your baby can play with his hands and feet for a few minutes at a time.

A miracle! Suddenly you realize it’s strangely quiet in the bedroom and look in, only to discover that your baby, who so far has needed your attention for most of every waking moment, is amusing himself.

Maybe you can start reading the paper again — well, maybe just the headlines.

Beginning to understand the role of language

Researchers believe that by 4 months your baby understands all the basic sounds that make up his native language.

Between 4 and 6 months, he develops the ability to make some vocal sounds, such as “ma-ma” or “da-da,” though he doesn’t yet connect that sound with a parent.

You can promote your child’s sense of communication by mirroring, or imitating, his faces and sounds. Say “boo,” and he’ll try to say it back.

Because you react when he makes noises and tries to say something, your baby learns the importance of language and starts to understand cause and effect. He’ll begin to realize that what he says makes a difference.

Appreciation for a full range of colors

Babies see color from birth, but they have difficulty distinguishing similar tones, such as red and orange. As a result, they often prefer black and white or high-contrast colors.

Some great eye-catchers include primary-colored mobiles (hung out of his reach), bright posters, and visually striking board books.

Getting more selective about people

By 4 months, your baby may respond to your presence, your voice, and even your facial expressions by kicking and waving his arms.

About now, your child (who to this point probably bestowed smiles on everyone he met) is beginning to be picky about the company he keeps.

In large groups or with unfamiliar people he may need time to get comfortable. Allow for transition time with strangers or when leaving your baby with a sitter.

When he’s safely in your arms, though, he’s likely to be interested in interacting with other people — especially noisy, boisterous older children.

Remember, each baby is unique and meets social milestones at his own pace. These are simply guidelines to what your baby has the potential to accomplish — if not right now, then shortly.

If your baby was born prematurely, you’ll probably find that he needs a bit more time before he can do the same things as other children his age.

Don’t worry. Most doctors assess a preterm child’s development from the time he should have been born and evaluate his skills accordingly.